We made our way here after lunch. An imposing building of warm yellow stone we were led by our guide Peter to the top floor meeting room. After a few minutes he came back with one the sisters who quietly began to explain the history and purpose of the centre. Founded in the 19th century it soon became apparent that the most pressing charitable need was to provide a home for the many abandoned babies. Why has there been such a problem with unwanted babies?

The babies come to the orphanage in three main ways: babies found in the street, babies brought by the authorities and babies left by their mothers. By far the greatest problem is that of girls made pregnant by members of their close family. It is completely impossible for them to keep these babies; they have often been able to conceal their pregnancies for several months but eventually, in fear for their lives, go to the authorities. Arrangements are made for them to have the babies as soon as possible; often the babies are induced at seven months. Elaborate excuses are concocted by the police, social services and the orphanage to conceal from the families the real reason why the young women must spend days away from home. When the babies are delivered the girls must sign over their children never to see them again. They then return to their families in the knowledge that they run the risk of murder at the hands of their own family. These "honour killings" are not uncommon. Four happened last year to the certain knowledge of the orphanage. No action is ever taken against the male members of the family involved.

The babies are assigned new identities. Unable to adopt a true family name, their assigned name is Allah. They then spend 6 years in the orphanage before going on to an SOS school. Regardless of their true parentage, they are brought up as muslims. From the age of 6 til 18 they are brought up by two women in family units of 6 children.

However, the total separation from their natural family members leaves them in an ID vacuum. Some are never assigned proper identity papers; some are given papers that at least allow them to travel on the West Bank. Howerve, in a traditional society that is so aware of family and especially patrilineal descent, the absence of family can hinder employment prospects and make any normal marriage virtually impossible. These orphans with no effective ID often end up marrying amongst themselves and living on the fringe of Palestinian society. The orphanage is even brought babies by the Israeli authorities. Two Ethiopian asylum seekers abandoned a baby recently; they were Christian and the Israeli state only looks after Jewish babies so the child was brought to Bethlehem where it will be brought up as a Muslim by default.

Who are the nuns who look after these children? Well, it is virtually impossible for those from the Arab world to get permission from the Israeli authorities to work in the West Bank. The nun who spoke to us is from Lebanon but by virtue of her French passport is able to get a permit to work at the orphanage.

We were shown around the orphanage. There are 46 children there at the moment and 4 new borns have arrived in the last month. The close genetic relationships of the parents can often cause developmental problems.

The rooms and corridors are covered in bright frescoes and are immaculately clean and full of toys. We were shown the baby creche and the bishop was allowed in. We then made our way to the playroom where many of the children were. We sat among them and played. RL 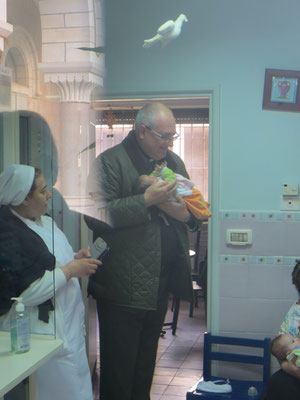 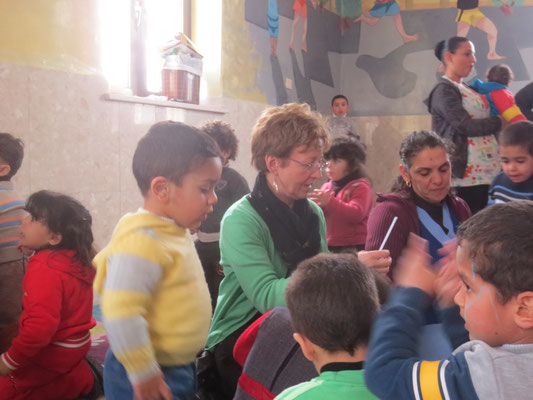 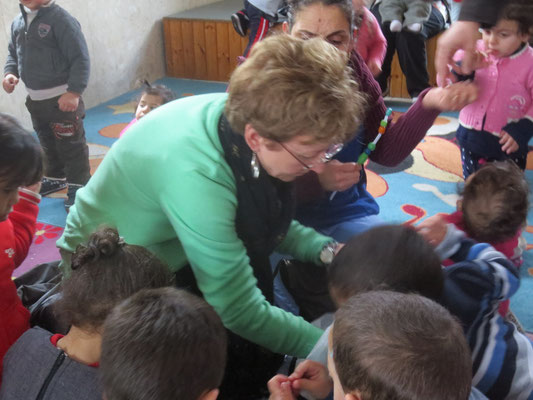 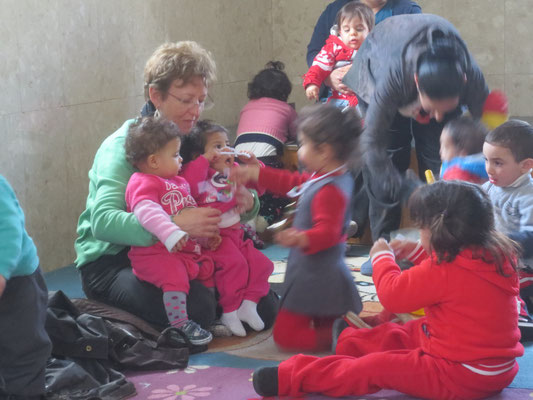