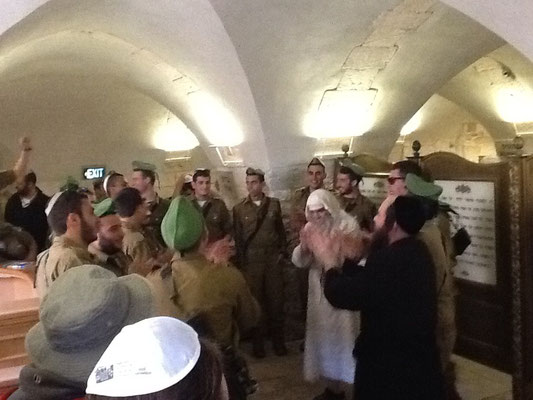 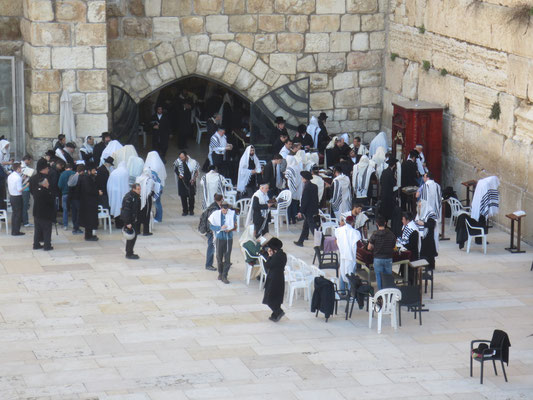 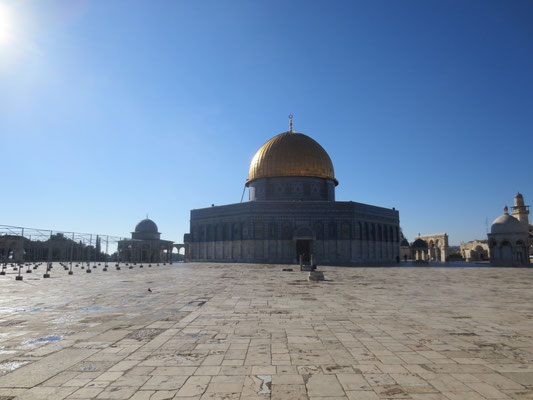 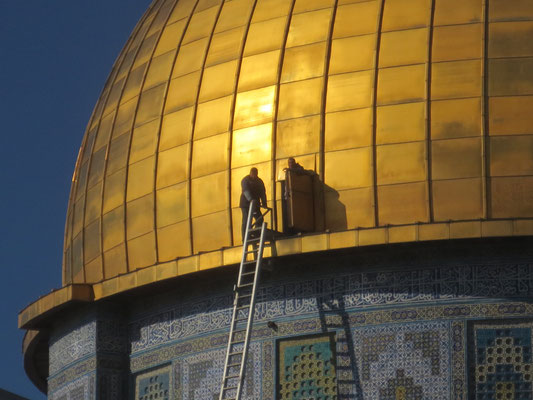 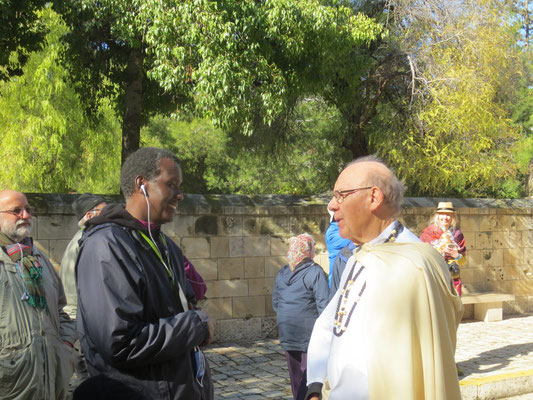 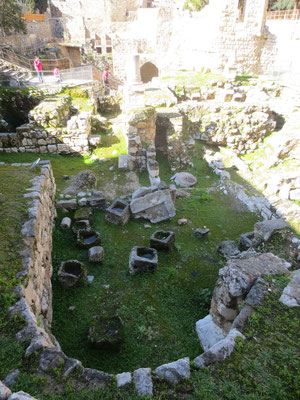 Just got back at 5.15 and now we have evening prayer at 6, dinner at 7, "grill the bishop" at 8 and compline at 9. Being on pilgrimage is exhausting.

Eight o'clock start this morning under a clear blue sky to make sure we were first in the queue for the Al-Aqsa mosque and the Dome of the Rock. We had already been told not to bring bags to reduce the risk of a comprehensive security church. As well as the obvious, there is a ban on items of a religious nature bring taken onto the site, as well as a ban on Jews (though we did see a group make a provocative and hurried tour under heavily armed escort).

The history of the temple mount is complex and controversial. The mythical site of Solomon's temple, the possible site of Herod's temple, left derelict after the Roman conquest and then the Dome of the Rock built by the Moslems in the 7th century to mark the site when some say Abraham was told to sacrifice his son and where Mohammed ascended into heaven to determine the number of times his followers should pray everyday.

Anyway, a beautiful building which, unlike last time I was here in 1978, we were not allowed in, on beautiful sunny day.

Next stop was St Anne's church and the Bethesda Pool. Built on the site of an Asklepion, the structure of the pools and associated water cisterns is still evident. We held a healing service before going into the church and singing. It is famous for its acoustics and every group seemed to have a party piece prepared. The priest in charge greeted us and it turned out he had spent 17 years in Rwanda and could chatter away to our Bishop Louis in his own language.

Lunch was at a small museum and cultural centre just round the corner from our hotel. Owned by one of the few remaining Christian Palestinian families of Jerusalem, it was nearly lost to incoming Israeli settlers but was protected by the Orthodox church and returned to the family a few years ago. It has been set up as a memorial the traditional life and artefacts of Christian Palestinians. Great meal and wine; a sort of upside stew of chicken, cauliflower, rice and potatoes. The traditional coffee here is cardamom flavoured.

Then a short walk into the Armenian quarter. First we went to the possible location of the Last Supper, now a building from the Crusader period that was converted into a mosque. This is a very controversial building because the lower storey is a synagogue and a cenotaph dedicated to King David. Some of our gentlemen found themselves caught up in rollicking dance with armed Israeli soldiers singing psalms in the synagogue.

Then the Church of the Dormition (Ascension) of Mary. A further walk along narrow alley ways back to the coach and a short drive outside the old city walls to the church of St Peter in Gallicantu. This is the site of the high priest's house and also the cell where Jesus was put after his arrest. By now the sun was getting low and the view over the Kidron Valley was beginning to glow. Home.

Must finish or I will late for prayers. RL