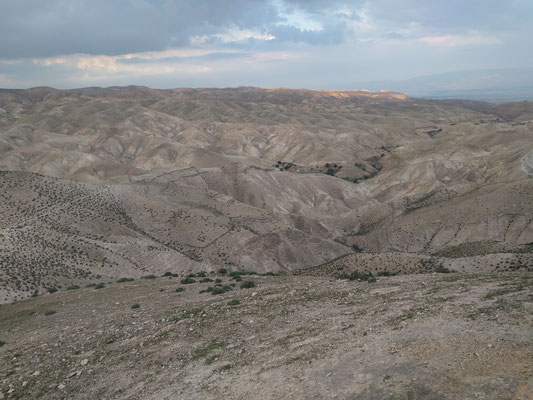 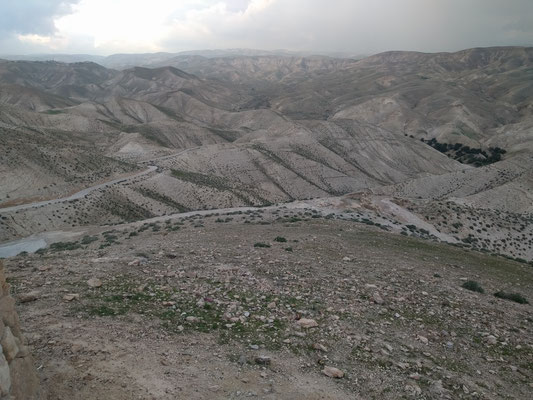 Another long day but with the promise of warmth and sunshine. Off we set at 8 o'clock; perhaps you should know that after the first day when we realised we had no methodology of knowing whether we had left anyone behind at any point, we were arbitrarily put into groups,1-6. It took some time but now we all have to shout by group if we are all present. It was made easy for our bishop; he is the only person in group 6.

The drive down to the Jordan is all downhill - 800 or so metres down to sea-level and then another 400 below. We passed by rolling barren hillsides, barren except a faint haze of fresh grass shoots. We were told that shortly and for a short time this deset would be a sea of green. That explained the shepherds and their flocks moving up the hill sides, scenes which for the first time on this trip seemed to hark back thousands of years.

Our early start meant that we were first in the coach park at the river. River yes, but only three or four metres wide. A chocolatey brown, it certainly was'nt for drinking. Two armed soldiers in thick green fatigues followed us to the wooden decking alongside the river. They were pretty casual; the bodet with Jordan is the river so anyone on the opposite bank was virtually within sword-fighting distance let alone gunshot. However, we only saw one person on the other bank which in contrast the concrete stair ways and infrastructure on the Israeli side, consisted of wooden posts and rush covered rooves.

Petra as always was told by the bishop to take the first step, so she gingerly edge out into the cho olate river about a metre. Alan followed her and webgan our renewal of baptismal vows service. By this point one or two other groups had joined us on either side but we certainly sung the heartiest of all the groups there.

Next stop was Qumran, most famous of all the sites that contributed to the whole collection of Dead Sea Scrolls. The politico-religious story surrounding these extraordinary documents was new to me. Found by bedouins in 1947, before the creation of the state of Israel, some were sold to Bethlehem man who subsequently traded them in New York with the help of the Orthodox church. Others remained on the West Bankinwhatwasthen the state of Israel. French archaeologists discovered further documents which were kept by the Jordanian government. However the 6 Day War in 1967 gave Israel the opportunity to seize not only  those documents exhibited in East Jerusalem, but also those still held by the dealer in Bethlehem.

Anyway, the area has now been comprehensively searched for Scrolls and it seems likely, but not proven conclusively, that the Scrolls were stashed away by a group identified elsewhere as the Essenes, who like other movements at the time were very hostile to the practised of mainstream temple based Judaism and had withdrawn into the desert to work out an alternative religion orientated lifestyle in which ritual cleansing by water was very important.

All of this documentary evidence set beside the stories reported later about Jesus and John thd Baptist rsisrse all kinds of speculation as to whether all these parties knew of each other or mixed in each other's company. It does reveal evidence for the groups that were hostile to the status quo in Jewish worship under Roman rule.

Then on to the Dead Sea. I had been in for a dip in 1978 and did not remember it as a pleasant experience. Others were keen to try so whilst dkmd if us consumed a cold beer in the shade others performed the lie back and float routine recommended.

Lunch in Jericho, our first category A zone on the West Bank. This means that the security and administration are run by the Palestinians and Israeli citizens are forbad entry.  The city is strange mixture of modern and old housing, unfinished or obviously abandoned, with large unused plots where litter collects. Our lunch was excellent, as has all the food here been. Then another gift shop but one with beautiful glassware and ceramics. I think this was a set up by our guide for our next stop was Mount of Temptation. More spectacular though was our next brief stop which allowed us a view over the dramatic gullies of the Judaean desert.

Still more sightseeing. As we entered the environs of Jerusalem the weather changed to cool and drizzly. Our guide took us to where the Palestonian suburb of Bethany has been abruptly cut in two by the 5 metre high Separation Wall.

Then as the light faded, on to St George's Cathedral for their Ash Wednesday service. Got there just in time; cathedral was pretty full, so full they ran out of communion wine according to Petra.

Got back to hotel just after 7.30. They had kept dinner hot for us thank goodness. As I write this at twenty past none I hope there is nothing else on the agenda this evening. We have to get up at 5.30 tomorrow to walk thd Via Dolorosa.