March 2017: Congratulations to Eleanor and Adrianne who have passed their Dean's award exam. They sang "Be still for the presence of the Lord", a psalm, and "Fairest Lord Jesus" to the examiner. They answered questions about their psalm and anthem, as well as talking about the layout of our church, the sung parts of the communion service, and Christmas.

Congratulations also to Lottie, George and Emilie who have passed their Bishop's award exam. They prepared a hymn, psalm, anthem and Magnificat to sing to the examiner. They spoke about how music helps people to pray, studied the biblical origins of five liturgical texts, and three holy days.

We are very grateful to our ordinand Jess who has help in the preparation for these exams and we are very proud of the hard work and achievements of our choristers.

Susanna Briggs writes about her experience inside the organ:

My experience in the Organ was phenomenal!

It was my very first time going into the Organ.

It all started with the door…

It was wooden, small and short. You would need to bend down to enter. When you first bend down to fit into the door there was a pipe. Elizabeth clearly told us not to step on it. Reasonably I did not step on it. Once I entered the Organ it was more spacious than I thought it would be. Elizabeth showed us the pipes and how they reached the ceiling. It was very fascinating to see how tall and how short every pipe was. Then, Elizabeth told us to climb up this step so we could see some more interesting pipes that she would use while she was playing the Organ. These other pipes were different to the pipes that we saw before. Imagine a pencil. Some of those pipes were exactly that size, some were even smaller! After that she said, “turn around” so we all turned around and saw these bizarre wooden doors why are they bizarre you ask? Well, they open and close to adjust the volume coming out of the Organ.

After that she played some notes so we could hear how the sound came out of each sort of pipe. The colossal ones that reached the ceiling played a medium volume and low pitched sound. The pencil sized ones played also played a medium volume but it was very high pitched. Then she played a bunch of notes while opening and closing the doors. Now there were some pipes that I did not tell you about. These pipes were shaped like a trumpet and sounded a bit like a trumpet as well. They were very very LOUD! Elizabeth warned us very clearly to cover our ears if we wanted to because they were very loud. I covered my ears at first but then I slowly let go and they were not as loud as I thought they would be.

As I exited I thought I could not believe that I had just been inside of a humongous instrument!

Finally that was my journey through the Organ.

Ella Barker wrote an acrostic poem about the organ

Out of the organ came a

Roaring sound. It was so loud it made the

Ground shake. It was

As loud as a yell from a lion. It

Never failed to impress you with noise.

And you could feel the organ vibrating

Rapidly all around you.

Everyone really enjoyed our trip inside the

Which was as noisy as 15 people making as much noise as they could.

Eventually, we had to exit, full of lots of loud

Organ. It was disappointing when we had to leave, but we'd all had a 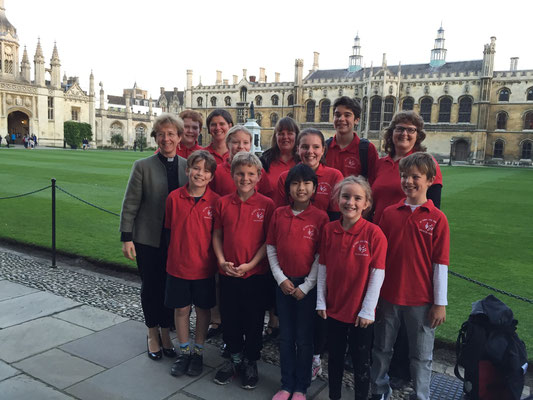 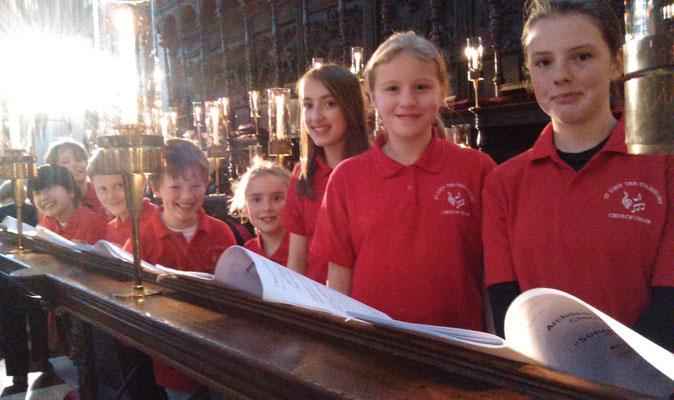 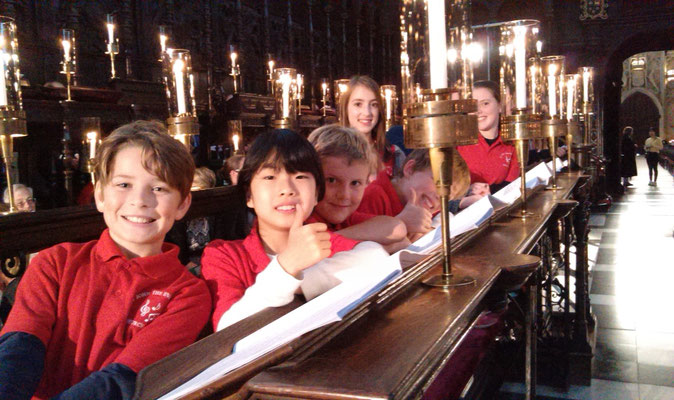 On Saturday 20th September 12 members of St John’s choir sang in King's College Chapel as part of the Archdeaconry of Cambridge Church Music Society’s Choirs’ Festival. Here are some accounts of their experiences.

I have watched the Christmas Carol services from King's College Chapel on the television with my family and I never expected that I’d be singing there myself. It was amazing. The fan-vaulted ceiling was much higher than I expected and very beautiful. It was exciting singing with so many people and the high ceiling made the sound echo. (Eleanor)


On Saturday morning, when I woke up, I felt a bit nervous as today was the day that we were going to King's and I was going to audition to sing a solo. We got to Great St Mary¹s, where the rehearsal was, nice and early. My Mum, Benji (who was auditioning for the tenor part) and I waited in the alto pews until the audition started then we went over to the piano where the conductor was sitting. We met another soprano, tenor and a bass and we all sang our parts. It went well and later in the rehearsal we found out that we would all be singing in a sub-choir. Finally, later that evening during the evensong at Kings, the time had come to sing the final anthem: The Heavens are Telling¹ by Haydn. Benji, two other tenors, two basses, me and two other sopranos took our positions around the conductor and we all sang as well as we could. It was amazing to be there and I would love to do it again! (Theo)


On Saturday 20th September, we had a rehearsal at Great St Mary's at 1.15pm. The conductor was

very good and very nice, and I enjoyed it. Then we went across the road to King’s College Chapel and

had another rehearsal. During the 45 minute break we ate our packed tea on the wall outside King’s.

The service started at 5.30pm and was really loud. There were so many people in all of the choirs

together, but we at St Johns had the most trebles (8 – me, Theo, Lottie, Harriet, Emily, Eleanor, Adrienne and Barnaby – plus Robert and Benjamin as well). Theo and Benjamin did solos. Then we cycled home. (George)


As a parent (of the proud variety), I’d like to add my thanks to Elizabeth and Suzanne in particular for

training the children up and for arranging and accompanying them to King's. It was an unforgettable

experience for them all as well as for us mums and dads. I’d also like to thank all the adult members

of the choir for their support and encouragement of the youngsters in so many ways, not least by

singing with them. Church choirs are one of the few places where adults and children really do work

otherwise be able to from a very young age. I grew up singing in a church choir myself and believe it

was one of the most formative experiences of my life.

The choir at St. John’s is a wonderful, warm and nurturing community which adds so much to the life

and worship of our church. Choir practice really is FUN and I think there might be room for a few

more trebles if you know of any singing children! (Petra)

On Wednesday 9th September several members of our choir travelled to Sawston church to sing at the funeral of Douglas Jeal, teacher and artist. Other singers from Stapleford and Westcott House theological college also joined the group.

It was amazing to see so many people assembled to sing for the funeral of a complete stranger. However, as the service progressed we did learn a lot about Douglas. The service was organised by Petra, our curate, who is a friend of the family.

We sang movements from Faure's Requiem, the Sanctus and In Paradisum. Singing such beautiful music in the context for which it was intended to be sung was an incredible experience. This was music in action, reminding us of the great combined power of Church music, prayer and faith. The words of the In Paradisum sent a powerful echo around the church recalling the story of the resurrected Lazarus and celebrating the welcoming by the angels into the celestial Jerusalem.

This was an amazing morning, a very beautiful funeral and a moving reminder of both the beauty and the frailty of the human condition - a theme that had inspired many of Douglas's sculptures. ( NH )

Playing Josephine was hard work as the songs were difficult to learn. There were some very high notes and I was very pleased to be able to do it. The highest note was the C in the third octave. My mum said to be careful as I might break the church windows with my high notes! The acting was not very easy as I had to pretend that I was in love with Ralph the simple sailor.

Luckily Suzanne was on hand to show us how to look in love. We had to hold hands and look into each other's eyes without giggling. The set was so good that we all really felt like we were on a proper boat but without feeling sea sick.

Thank you to all the adults who made the production possible. I am very pleased to have had this amazing opportunity. All the songs are stuck in my head forever now. This was a very ambitious production and I am pleased that it all went so well and that we managed to raise so much for the choir fund.

Barnaby: I enjoyed taking part in HMS Pinafore. It was really good learning all the songs in the rehearsals and watching us all get better as the weeks went on.

I was a bit nervous before the actual performance – worried about forgetting my words, but once the music started and I got on with my sweeping the decks, I felt a lot better and didn’t forget any words.

I thought everyone was brilliant and Robert did exceedingly well and made the performance shine. My favourite song was the one at the end – “He is an Englishman” with all the flag waving. It was a really good first performance for me and I can’t wait to do another one.

We dedicated our singing and playing at the reflective service on Sunday 21st September 2014 to world peace and joined in the 'one day one choir project with choirs from all around the world.

One Day One Choir is a global choral initiative, starting in 2014, which has been created to mobilise the inspiring and harmonious power of singing together to unite people globally to sing for peace on and around Peace Day, September the 21st.

Anyone, anywhere can join in either by dedicating something you are already singing on Peace Day or by creating a performance, however short or long, with an appropriate focus on peace - peace at home, at school, in our communities and work places, and around the world. You can find out more on the project website http://www.onedayonechoir.org